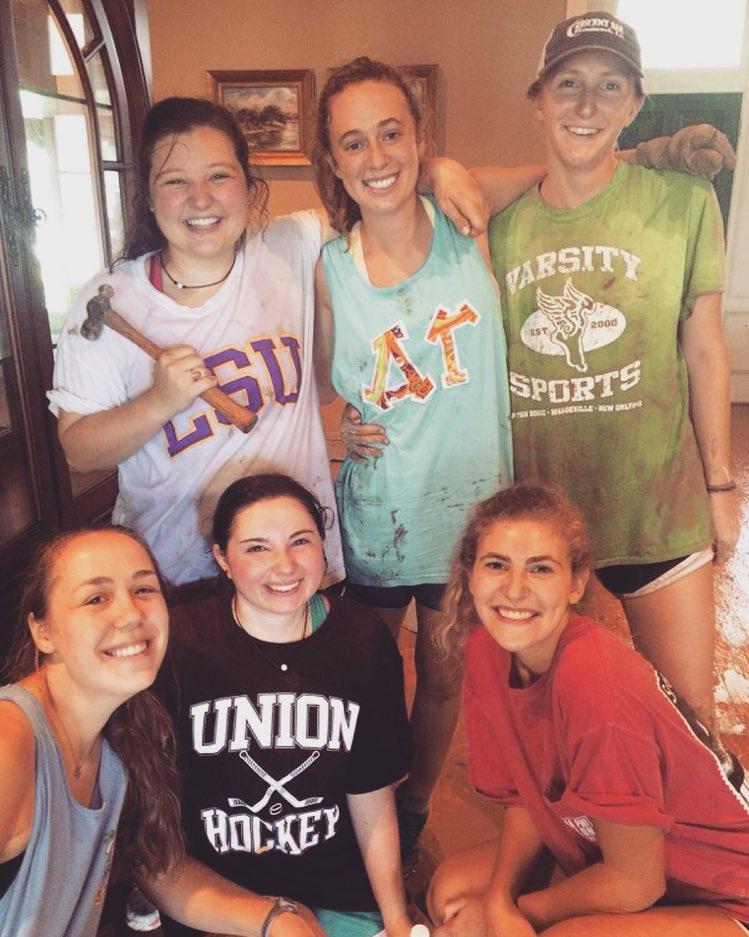 How did your family find out their house was flooded? (i.e. did they come home to find water in the basement, or were they sleeping and came downstairs to damage)

We never thought something like this would happen to us. I live 30 minutes out of downtown Baton Rouge, so we have lakes and rivers in my area which have filled up with water before. However, the only other time in recent years that my side of town flooded was in 1983. My house and most of the street didn't exist yet, but after the '83, everyone made sure to build above the water level from that flood.

I was not actually with my family when the water came in. I am on the Panhellenic Executive Council at LSU where I serve as the Vice President of Recruitment Personnel. My major role is to train our 114 Recruitment Counselors (or Gamma Chis) who manage the 1243 Potential Members that participate in our recruitment process. I am the only Delta Gamma serving on Exec, so it has been exciting to experience and work with other members of our sister NPC groups as well as bring what I learn back to everyone at Gamma Zeta! The particular week that the flooding happened was immediately following our Gamma Chi Training Week, which ended Thursday. Our university requires Panhellenic Exec and Gamma Chis to disaffiliate and live in a hotel located on campus to help keep them out of their chapter houses and available if a potential member should need assistance.

The rain was horrible Friday, so we canceled our events, and I decided to run home to grab what I needed for recruitment week, which was to be August 14-20. I didn't know when I walked through the door on August 12 that it would be the last time I would see my home as it had been for the last 17 years of my life. I didn't spend even an hour at home, because I heard the roads were flooding and I didn't want to get stranded, as I needed to get back to run Recruitment. In retrospect, I don't know if I'm grateful or sad that I didn't stay longer. Regardless, I headed back to the hotel, thinking it would ever happen to me.

I distinctly remember waking up on Saturday, August 13, with all of Exec in one hotel room, watching the news. It was then that we started to get the feeling this wasn't just rain, it was bigger than that. We pushed back recruitment again, and we began living day by day, constantly assessing the situation.

I called my mom to check in, and she assured me that everything was fine. She said that she was relaxing at home with our dog and cat, Sally and Cookie. My brother, Daniel, was skyping with his friends and my dad was out helping fill sandbags. She said that our neighbors needed help sandbagging and that my dad and my brother planned to do so that afternoon. She said she would keep me posted.  At 10:30 Saturday night, I got a phone call from my mom saying that the water was coming in and she wanted to know what she should save out of my room. My dad told them to move things as high up as possible and that a boat would be coming to pick them up the next morning. After the phone call, I think I was still in shock. I was incredibly scared for my family's safety through the night, but I was so grateful that someone was on their way to pick them up. The next morning, my mom, brother, cat and dog piled into our neighbors' boat, while my dad stayed behind to monitor the house. The water didn't enter the house until 4:00 PM Sunday afternoon. My dad was the only one in the house when the water started coming in. He stayed behind to put up all of our furniture on bricks to try to save what he could. He's so brave, and I have no idea how he did that all by himself. He took a video of the water, which I only recently was able to watch. It was surreal to see a place so consistent in my life like that. That night, Panhellenic Exec and all 30 Gamma Chis at the hotel went to the LSU Feildhouse to help Dean Maria Fuentes-Martin, or Dean Mari as we typically call her, set up cots for a triage unit to operate there. It felt good to help in someway, when I felt so helpless about the current situation at home.

What was damaged? To what extent were things damaged?

On average, we got 6 inches in our home. My brothers room is the lowest and had 8-10 inches. I remember when the roads were opened up on Monday August 15, that my Panhellenic adviser told us that it was important for us to go home and be with our families, and that our well-being far outweighed any kind of recruitment planning. I am so grateful to the fraternity/sorority life staff and my fellow Exec Members. I don't know how I would have made it through the week without their support.

I remember walking up to my house for the first time since the flood. The drive took almost an hour and a half with traffic and detours, and I had to park on the street because our driveway was still covered in water. It's a strange thing seeing your childhood home in that kind of state. The walls are the same, the floors are the same, but it's as if you're looking at an alternate reality. I remember walking into my room and not even being able to process what I was seeing. Just days ago, my room was as I had left it. I live in the Delta Gamma house, so many of my school things had already been moved, but this had been my room since I was four years-old. Everything in this space was connected to my life as far back as I could remember. The funny thing is, I didn't even cry when I saw it. It was so surreal. I don't think I believed it was real. Sometimes I still don't feel like it's real.

From Monday, August 15 to Thursday, August 18, my family, my brother's friends and my parent's friends worked on our house non-stop. We saved what we could and threw away what could not be salvaged. My family is extremely close, which is one of the reasons I wanted to go to LSU.  It sounds strange, but I feel as though my family grew even closer over those couple days. So many of my DG friends reached out to me throughout the week, offering clothes, boxes and support. The biggest blessing from my Delta Gamma family came to me Thursday night after long days of gutting my home, when we planned a dinner/get together at my friends' apartment. When I got there, they had brought muffalattas from my friend's father's store in New Orleans, tons of good sturdy boxes and pulled out some wine. It may seem like such a small gesture, but I really appreciated the distraction. I was thankful for that support in that moment because it was enough to get me through the next couple of days of cleaning. It was just nice to be a normal college student for a while.

Did you or any DGs help in any way?

The biggest thing Delta Gamma did for me during this whole experience, was to truly live the oath of friendship. We say the oath of friendship as a chapter after every meeting, and I honestly had no idea the soundness it could have in my life. I received so many calls and texts from chapter members, alumnae, advisers and so many others during that time. Things were difficult because of the dynamic during recruitment, but they reached out anyway. They went out into the community and helped at so many different sites. They were out there to Do Good and I was thankful that they were my biggest cheerleaders during a very difficult time. I think the biggest thing for me, was how positive and supportive everyone was.  When I revealed my chapter affiliation to the 1100 New Members on Bid Day, I had never been prouder to wear my DG letters.

The most important way my DG sisters have help me is through the flood recovery. The biggest challenge for me was re-adjusting to school while simultaneously holding recruitment during the first week of school as well as working on my home any spare moment I had. I honestly don't know how I would have survived without my DG sisters as well as fellow members of Panhellenic Exec. I'm so fortunate to live in the Delta Gamma house, surrounded by 52 girls who I can talk to at anytime. There is no better way to describe it other than that they truly gave me courage to get back up, strength to keep going and the peace to know that they loved and supported me.