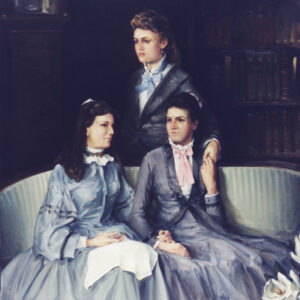 Delta Gamma Fraternity was founded in 1873 at Lewis School in Oxford, Mississippi, by Anna Boyd, Mary Comfort and Eva Webb when the three friends from Kosciusko, Mississippi, found themselves trapped at school for the winter. School openings in the region had been delayed by a yellow fever outbreak which would cut winter break short, meaning students would remain at school over the holidays. Stranded 100 miles from home, the three young women turned to each other for support. Inspired by male students at the nearby University of Mississippi who were members of Greek letter organizations, they decided to form their own.

They chose the Greek letters Delta and Gamma to stand for “do good.” The three young women founded the organization as a literary society and as a club of, “mutual helpfulness”. Founded before the term sorority was used, the Greek derivative phratres of phratria, meaning groups or groups of people with similar interests and backgrounds, was the basis for the title Fraternity.

By 1881, there were nine Delta Gamma chapters installed and the first Convention was held. Only two chapters attended: Eta-Buchtel (Akron), and Psi I-Lewis School. The next Convention was held in 1883, where many milestones were marked: an official jeweler was chosen, the official colors were changed from pink and blue to bronze, pink, and blue and the decision to publish a Fraternity journal was made. The first edition of the ANCHORA was published in 1884 and has been in continuous publication ever since. At the third Convention in 1885, the cream-colored rose was chosen as the official flower of Delta Gamma.

In March 1887, former ANCHORA editor Abby Soule, Eta-Akron made an appeal in the publication for a reunion day for all Delta Gammas. Eta chapter had been using March 15 (their installation date) as their own reunion day and this was decreed at the 1888 Convention. This date also had the added benefit of not conflicting with the winter holiday season.

At the 1936 Convention, Sight Conservation and Aid to the Blind was adopted as the Fraternity Service Project. By 1942, it was clear Delta Gamma needed a permanent office. Roberta Abernethy, Epsilon-Ohio State, was hired as the first paid staff member and established the first Delta Gamma Central Office in two rented rooms in downtown Columbus, Ohio. In 1951, the Delta Gamma Foundation was incorporated in Ohio. By 1955, the growth of the organization required a larger space and the office was relocated to the Columbus suburbs, as the first Executive Offices.

In 1961, ground was broken for the construction of the new Delta Gamma headquarters in Upper Arlington, Ohio. With construction complete, Delta Gamma became the first women’s Fraternity to build its own headquarters. The first Anchor Splash, an event to raise money for the Fraternity’s philanthropy, was held by Beta Tau-Miami (Florida) in 1966.

The 1990s were a time of progress and change for Delta Gamma. More space was needed at the Executive offices due to the growth of the organization, which resulted in Project 90, a fundraising campaign to expand Executive Offices. This growth provided room for Foundation staff, leadership training and programming resources. The completion of the project made Delta Gamma the first women’s Fraternity to build a facility dedicated to serving the philanthropic activities of its Foundation. Sight Conservation and Aid to the Blind was changed to Service for Sight in 1995.

Delta Gamma has a long and storied history as a pioneer in the women’s fraternal movement. We have stood the test of time, but not by standing still. We continue to seek and find ways to live our motto to do good. One of the most recent efforts was launched in 2019, the Contextualization project. This process examines aspects of our history using the framework of contextualization, which argues it is better to educate and contextualize than to ignore or erase. Specifically, contextualization is an exercise to explore instances when our history has run afoul with the shared, transcendent values of our organization.

Today, the Fraternity has 150 chapters across North America and more than 250,000 members living around the world. The sisterhood shapes lives, promotes their educational and cultural interests, creates a true sense of social responsibility and develops in them the best qualities of character.

To learn more about the history of Delta Gamma, purchase a copy of the limited edition Sesquicentennial book, Celebrating 150 Years of Delta Gamma.