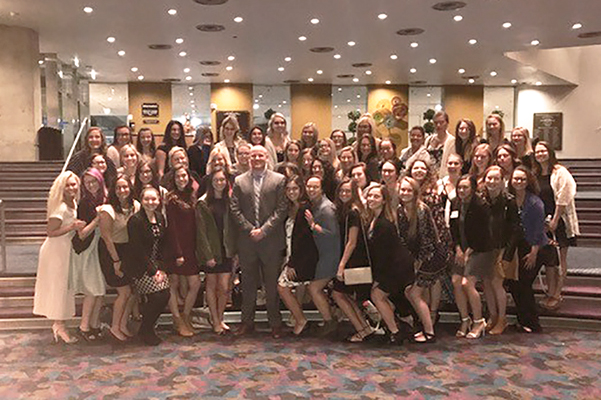 There was no way Spencer Stone could have prepared to become an American hero after stopping a terrorist attack on a train ride to Paris.

On March 21, 2017, 165 collegians and community members gathered to hear Spencer’s inspiring story at the Delta Gamma Foundation Lectureship in Values and Ethics hosted by Eta-Akron. His journey began on a vacation to Europe with two childhood friends when they decided to visit Paris. Shortly after the train ride began, Spencer was startled by a gunshot and the sound of breaking glass. Turning around, he saw an employee sprinting down the aisle followed by a man with an assault rifle. With little time to think, Spencer ran down the aisle at the gunman. “That was the longest sprint of my life” reflected Stone as he thought back to that decision that he needed to somehow stop the terrorist. The man attempted to shoot him, but there was a malfunction with the gun. It never went off. He tackled the gunman, but was stabbed in the neck and eyebrow by a boxcutter the man was holding. Eventually, with the help of his friends, the gunman was subdued.

Like our other Lecturers, Spencer inspired the audience. Maddie Watkins, Eta-Akron noted that having Spencer Stone as a Lectureship speaker, “was a great experience. He was very humbling and is truly a hero. He reacted in a way not many people would and it was a selfless act. I was honored to have the chance to listen to him speak and meet him.”

Spencer left us with this advice: “Make sure you have a plan. It’s not something that has to completely rule your mind, but it’s definitely something you need to think about.” This holds true in our everyday lives. In any situation, you should be thinking about the possibilities of what could happen and how you would react if something were to go wrong. Would you fight for what was right? Or would you let things happen around you even if you could stop it? Spencer urged us, “If you feel like you have the ability and have the power to overcome, don’t be a bystander.”