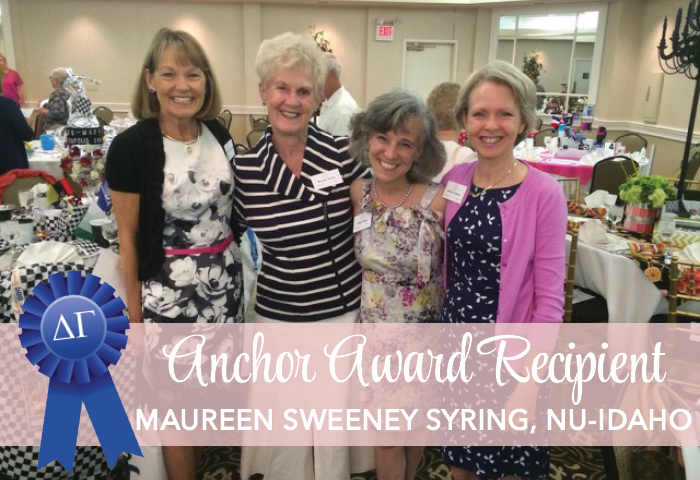 Maureen Sweeney Syring, Nu-Idaho, thinks big and accomplishes greatness – and Delta Gamma celebrated that vision by recognizing her with the Anchor Award in 2016.  From spearheading the wildly successful Project 90 to build the Martin Center at Delta Gamma Executive Offices and serving as Fraternity President, to stepping up, speaking out and leading changes to combat hazing and alcohol abuse on campuses nationwide, Maureen has lived and led with her Delta Gamma values shining brightly. Her contributions have been recognized with awards from the North American Interfraternity Conference (NIC), Association of Fraternity/Sorority Advisors (AFA) and myriad Greek organizations. Maureen, pictured here second from the left, has received the Cable Award, the Loyalty Award and the esteemed Order of the Delta Gamma Rose.

The Anchor Award recognizes alumnae who have received the Cable Award and whose Fraternity service and achievements extend beyond the local level with a demonstrable, unique and lasting impact on every member of the Fraternity. Anchor Award winners are a mainstay, providing Delta Gamma a lifetime of reliable support from which all members benefit. Find out how to nominate someone for the Anchor Award here.